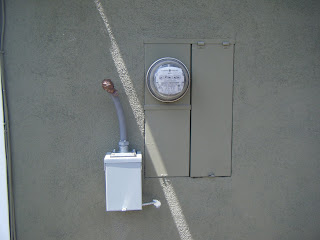 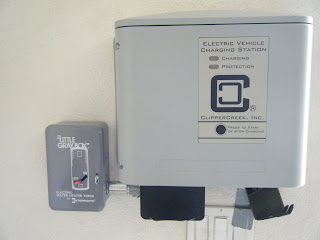 Just had the charger, extra circuit box aka sub panel and timer installed today by SunPower Electric. Paul and Andy did the install. Took four hours. The Charger is a 40 amp system which they mentioned is the only one Mini is currently using. The box next to the charger is the timer. The box outside next to the meter is the sub panel. Inside are two 40amp circuit breakers. The little silver cable with white paint next to it (in the outside picture) is the ground. This runs inside the wall to a ground outlet that is out of the picture. The ground outlet was already there and they simply tied into it.

Also, an important note that I wasn't exactly clear on. The only way to get the special EV rate from Edison is to go the route that I did. It doesn't matter if you have a 400 amp panel with plenty of room available. Unless you have the Time of Use Meter (second meter) installed you won't get that rate. In order to have that done you have to have the sub panel installed. I'll be billed $500.00 for my portion of today's install.

Next step is for Edison to come out and install the special piggy back meter. Then SunPower will come back to hook up the cable between the meter and the white box (outside picture). They'll also be bringing the actual cable that runs from the charger to the car.

We're getting close!
Posted by Todd and Kari at 6:15 PM